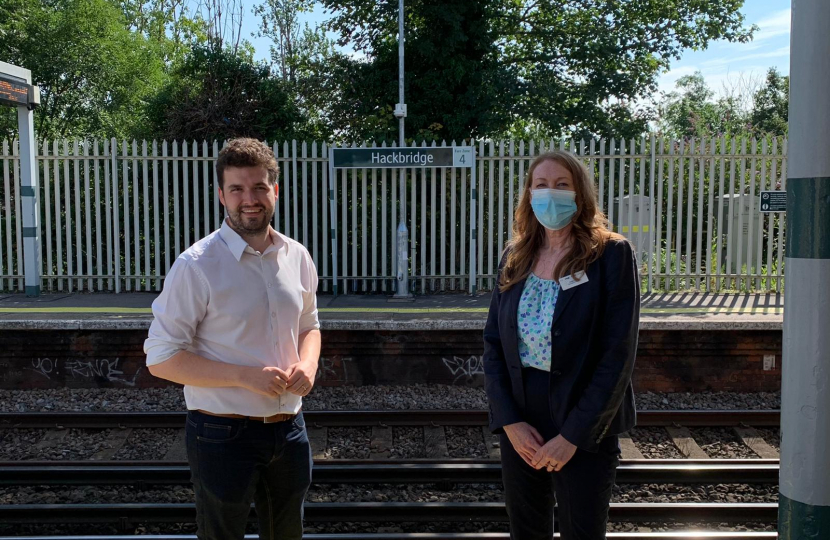 Last month I was delighted to announce the reintroduction of more services to London Bridge from Carshalton Beeches and Wallington, following my successful petition and campaign.

A further update has just been announced by Govia Thameslink Railway, which will impact travellers who use the services to and from London Victoria and Blackfriars. Unfortunately, this includes a reduction in some services.

These changes will come into effect in two tranches:

• All four Thameslink departures from Sutton per hour will run through central London (two are currently turning back at London Blackfriars).

• The Class 455, the 1980s Metro fleet will be retired and replaced by younger Class 377 Electrostar trains which are currently undergoing a £55m upgrade programme. This will mean the introduction of air-conditioning, toilets, 2X2 seating and at-seat power. o The size of the train will change depending on passenger numbers. In the constituency, as a busier route, the Sutton to London Victoria service via West Croydon will run as eight carriages as today. Outside of the constituency, the quieter Caterham to London Bridge via Norbury and Tulse Hill route (the slow route) will run as five carriages.

• On Saturdays, the Sutton to London Victoria service via West Croydon will reduce to two trains per hour to match the weekday off-peak service. In addition to using younger trains, the length of train will increase from four to eight carriages to help maintain capacity. The West Croydon to Sutton section has overlap with Epsom to London Bridge services, meaning the frequency in this section will reduce from six to four trains per hour.

• Carshalton to London Victoria services will reduce from four to two trains per hour, weekday off-peak and Saturdays.

• As on Saturdays and weekdays, on Sundays the Sutton to London Victoria service via West Croydon will reduce to two trains per hour.

Unfortunately, GTR are still suffering from the long-term implications of the Covid-19 pandemic. Commuter passenger numbers are still hovering around 60-75% of pre-pandemic levels, which represents a deficit of several hundred million pounds of funding per year for the rail operator.

Whilst I appreciate that trains services need to reflect realistic passenger numbers, I am disappointed with these proposals for September 2022 and will be campaigning against them over the coming months. We’ve had success on rail services before and I hope we can do it again. I will continue to keep residents updated on this issue.

Carshalton and Wallington is poorly connected compared to other London Boroughs. In fact by many estimates, the London Borough of Sutton does appear to be the worst connected Borough in London, and yet received the smallest amount of investment from the Labour Mayor over many years.

Last week I attended an event in Parliament to mark Dementia Action Week 2022. This year’s theme was ‘it’s not called getting old, it’s called getting ill’, focusing on the importance of a dementia diagnosis, reminding people that symptoms such as memory loss are not just a natural part of ageing.