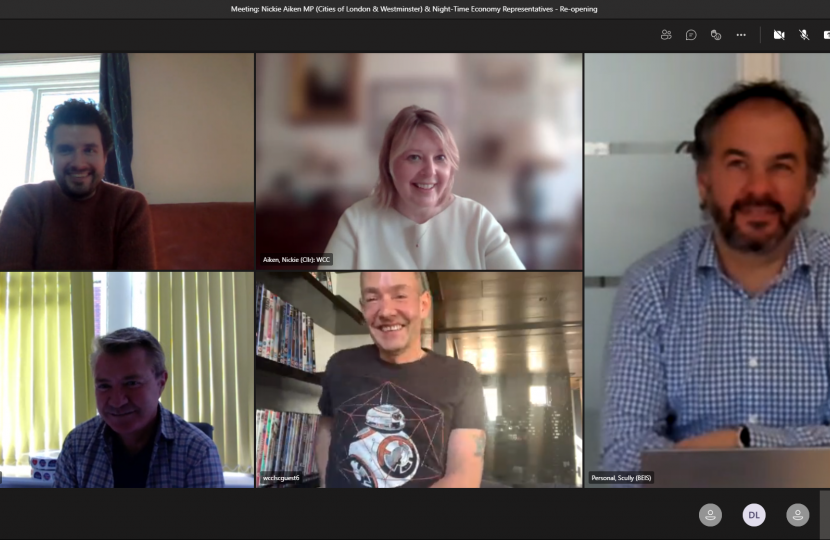 This afternoon I met virtually with representatives from the Night Time Economy, along with the Minister for Small Business - Paul Scully - and the Member of Parliament for Cities of London and Westminster - Nickie Aiken - who represents a number of bars and clubs in central London.

Over the past few months, I've been working with businesses locally that operate in the night time economy - including our fantastic pubs and breweries sector - as well as with people whose jobs and livelihoods depend on these venues reopening safely and securely in line with the Prime Minister's recently announced roadmap for recovery.

It was a pleasure to be joined by Jeremy Joseph, who I've met previously and who owns the G-A-Y brand of pubs and clubs in London and Manchester, as well as Gary Henshaw who owns and operates Ku Bar and She Soho, amongst other venues. We heard directly from them just what the ongoing impact of coronavirus has been on their businesses, and what support they need from Government as we begin to unlock the economy in the coming months. Particularly important is to make sure that venues that can operate outdoors and with takeaway drinks can do so in a controlled manner, and with all due consideration to safety of patrons and neighbours. It is also vitally important that we ensure that gay-friendly spaces like G-A-Y, Ku and She are able to survive and thrive, as the loss of these LGBT+ venues in London would be a disaster for the gay community.

I was glad to be able to speak to the specific points around the concerns workers in Carshalton and Wallington have raised with me, and I was grateful to the Minister for his time for the meeting. Paul has been an absolute champion of the night time economy sector, and is committed to doing everything he can to support the businesses as we unlock.

I will continue to follow this matter - on behalf of all businesses operating in the night time economy and all those who work in them - very closely as a member of the APPG Night Time Economy.