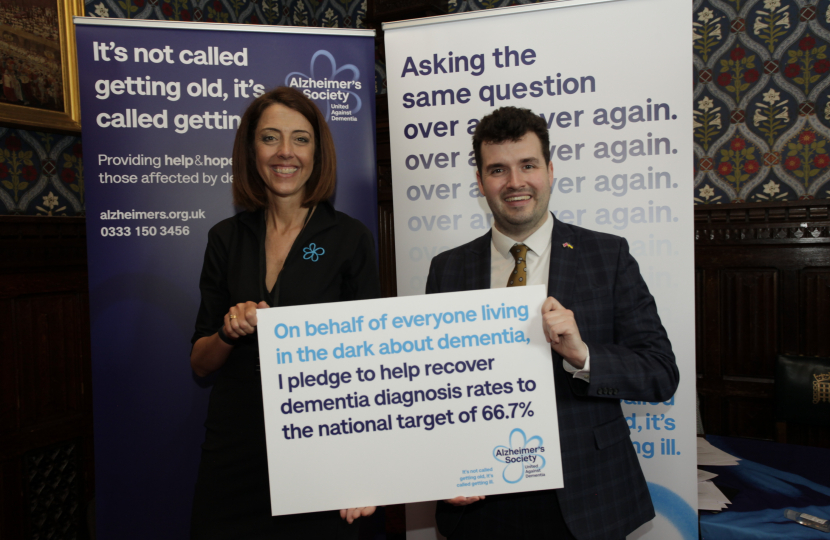 Last week I attended an event in Parliament to mark Dementia Action Week 2022. This year’s theme was ‘it’s not called getting old, it’s called getting ill’, focusing on the importance of a dementia diagnosis, reminding people that symptoms such as memory loss are not just a natural part of ageing.

The event was a useful opportunity to hear directly from those affected by dementia, including those who have been diagnosed, support workers who work with them, and those clinicians involved in diagnosis.

There is still much to do in terms of the diagnosis of dementia and the ongoing support for those who receive one. For instance, current research suggests that because of the pandemic over 30,000 people living with dementia have not yet received the diagnosis they need.

In Sutton alone, there are currently around 2,410 people living with dementia in the borough, with this figure predicted to rise to 3,250 by 2030 – an increase of nearly 40%. However, this is just part of the picture. The NHS estimates that there are around 620 people in Sutton who currently have dementia but are yet undiagnosed.

I will continue to work with both the local NHS Trust, and the Secretary of State and his team to ensure that we have the necessary support in our area for those needing dementia diagnoses and treatment.

Finally, please remember that whilst a dementia diagnosis can be daunting, it is important that people are aware of – and recognise – the symptoms of dementia. Alzheimer’s Society have put together a useful resource park of online support and advice, complete with a new symptoms checklist.

Discussing the failings of Sutton Council when it comes to its SEND provision.