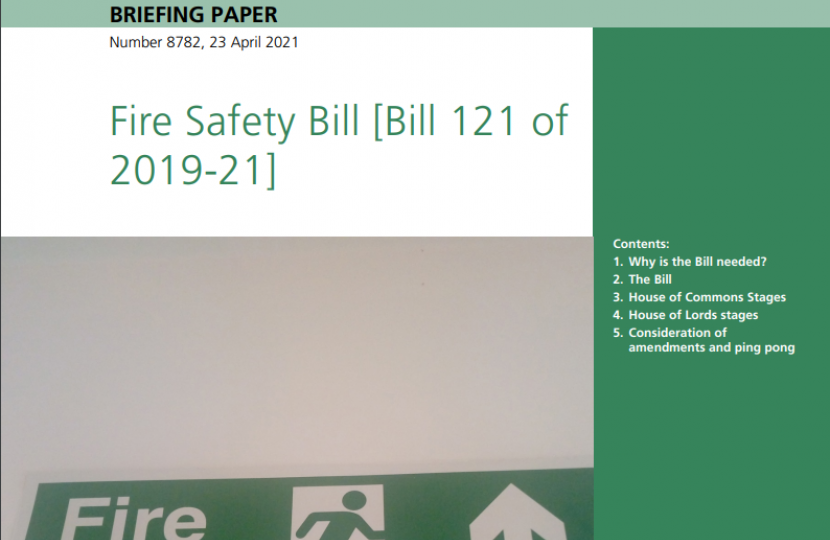 I wanted to update residents about my efforts to try and secure a greater safety net for leaseholders living in buildings affected by fire safety defects, such as cladding.

Tonight, the House of Lords decided not to insist on amending the Fire Safety Bill after several failed attempts to get the Commons to agree.

I supported the amendments tabled by the Lords on each occasion, so I am disappointed that we weren’t able to find a compromise or form of wording, which commanded a majority support in the House of Commons.

The amendments I supported were aimed at widening the scope of the protections contained within the Bill, particularly for buildings under 18m, to be absolutely sure that leaseholders in shorter buildings with fire safety defects that were not specifically cladding related could also get support.

I have had extensive discussions over the phone with Ministers throughout the passage of this Bill through Parliament to stand up for my constituents who live in affected blocks, and along with colleagues we have managed to secure many improvements, including getting the Government to massively increase the scope of the support that was previously available (a fund limited to buildings over 18m), to a new £5bn fund that covers the cost of removing unsafe cladding from all buildings over 18m, partially funding a scheme for buildings under 18m so leaseholders will pay no more than £50 a month if necessary, an industry levy and tax to get developers to play their part, and a new safety regime.

On top of this, the Royal Institution of Chartered Surveyors (RICS) published new guidance on EWS1 forms, which will take around 500,000 leaseholders out of the need for one entirely, and should support those who do require one, combined with Government action, so that they cannot be used as a tool for lenders to issue blanket refusals to lend.

Throughout this process, I have just wanted to make sure we’re doing all we can within this Bill to protect leaseholders who’ve had years of worry, financially trapped in homes they cannot sell, rent or otherwise leave without suffering financial ruin. I have also been working with residents in affected blocks to do all I could to help them and resolve these issues, which I will continue to do. I didn’t want to stop the Bill, I just wanted to see if there were ways we could go further and ensure there’s no uncertainty for leaseholders who have already had years of worry.

My hope now is that the reassurances I was given about the Bill and about what is yet to come in the Building Safety Bill does indeed mean we are beginning to see an end to this sorry state of affairs. I will continue to stand up for leaseholders and challenge Government should it transpire that support has fallen short, so I will await the Building Safety Bill with interest to see what further measures are contained within it.

In the meantime, I will be discussing the implications of the Fire Safety Bill with the affected blocks in my constituency to see if it is now possible to unlock the financial deadlock, get lenders moving again and allow the residents who have had such a distressing few years the chance to put this behind them.

I will continue to update residents when the Building Safety Bill is published. As ever, if I can be of any assistance with anything at all, please do let me know.

This evening I attended the Wallington Christmas Lights Switch On with my Christmas Card Competition winner Leo!