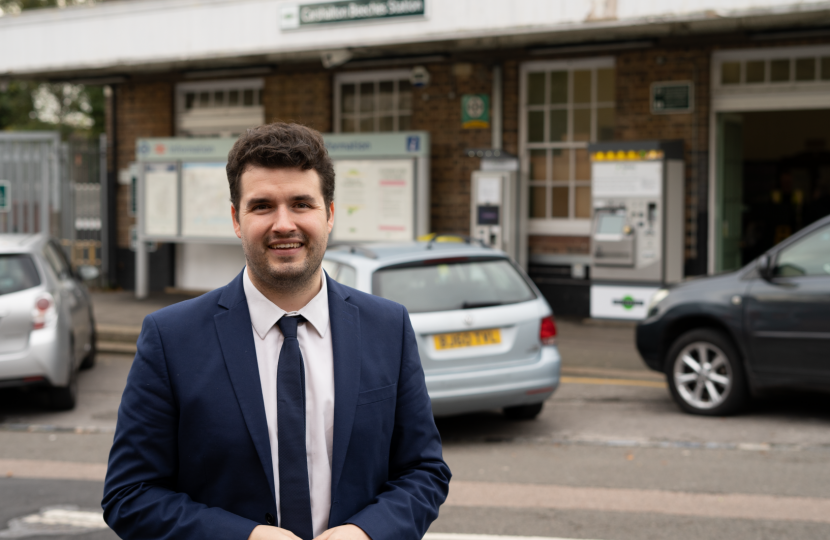 Carshalton and Wallington is poorly connected compared to other London Boroughs. In fact by many estimates, the London Borough of Sutton does appear to be the worst connected Borough in London, and yet received the smallest amount of investment from the Labour Mayor last year.

I'll work with commuters to get for new links to the area, such as the Tram and London Overground extensions, as well as pressing for improvements to existing bus and rail routes, so you can spend less time stuck commuting and more time doing the things you enjoy.

I was proud to be able to raise the issue of transport connectivity in a recent debate in Parliament, which you can watch here.

Bringing the London Overground to Sutton

I will be working with nearby MPs to campaign to bring the London Overground service to Sutton.

The service currently terminates at West Croydon, where there is an existing line already to Sutton via Waddon, Wallington and Carshalton Beeches. Therefore, delivering this extension is very simple in infrastructure terms, as there is no need to lay new rails, just keep the trains going.

I will be working with neighbouring MPs and Councillors, as well as the London Assembly Member, to persuade Transport for London (TfL) and Network Rail to make this important improvement, which will connect Carshalton and Wallington residents up to new destinations across London.

This service could have a possible further extension down to Belmont to service the new London Cancer Hub.

I have long supported the extension of the Tramlink to Sutton, but it has been very slow off the ground.

TfL have completed their consultation on the Tramlink, and have concluded that it will seek to install a new Tramlink between Sutton and Colliers Wood.

You can read more about the proposals here.

I will be supporting efforts to access the finances needed to deliver this project.

This service could also have a possible further extension down to Belmont to service the new London Cancer Hub.

Fighting for the Go Sutton Bus

Go Sutton is an on-demand bus service operating around the London Borough of Sutton. Introduced in May 2019, it proved popular and gained many regular users. It doesn’t follow planned routes, instead it takes you where you need to go within Sutton, but the London Mayor has announced that the trial will not be continuing.

Many of you got in touch to tell us how much you value Go Sutton.

We understood how useful the service is, so working with Sutton’s other Conservative MP, Paul Scully MP, our candidate for Croydon and Sutton in City Hall, Neil Garratt, we are pressuring the Mayor to rethink his plan to end Go Sutton.

The service needs to be permanent so people know they can rely on it.

I have raised before how little money Sutton gets from the London Mayor’s vast budget, less than any other borough and a tiny fraction of many others. Sutton is the only London Borough with no Tube, Tram, London Overground, or planned Crossrail station so keeping Go Sutton is just the start of my long term campaign to bring more investment to Sutton.

But as a starter, it made a powerful case that the Mayor’s decision to cut Go Sutton when Sutton already gets so little was wrong. If you’d like to help the Conservative campaign for City Hall in May, please get in touch.

Addressing problems at our railway stations

I am currently in conversations with Network Rail and Southern Railway about issues at some of our railway stations.

I also believe Hackbridge station needs to be extended to accommodate the increase in commuter numbers, especially with the development at New Mill Quarter, to a 10 or even 12 car platform.

Finally, the southbound platform at Carshalton Beeches is still not fully accessible, so I am working with Network Rail and Southern Railway to get the funding it needs become fully accessible.

As a commuter myself, I know that Southern and Thameslink services are not always the most reliable, especially following the disastrous timetabling rollout that caused delays and cancellations a few years ago.

Whilst there has been some improvement, I will be holding the rail operating company to account for their performance levels so that commuters spend less time stuck on delayed services.

I also want to see TfL give more attention to bus services in the Borough, increasing the frequency of some more popular routes, and making more of them double decker to allow more capacity.