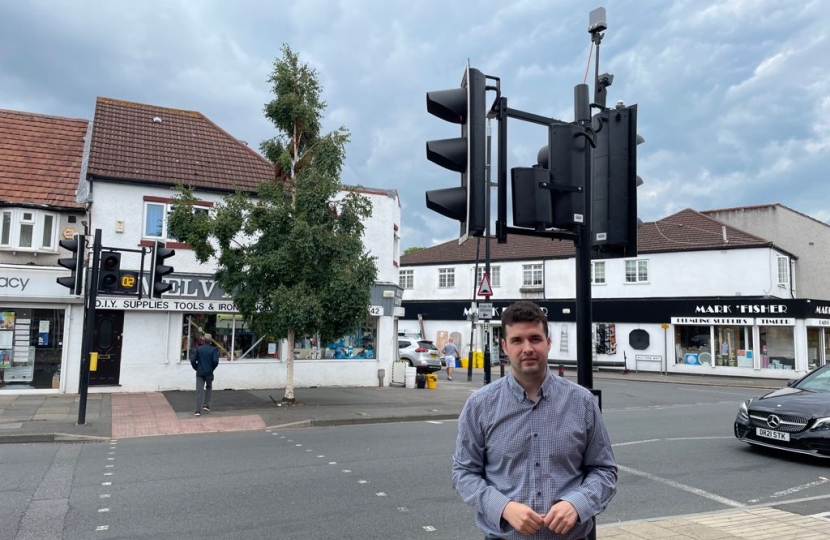 I've recently spoken to many businesses and constituents on Green Wrythe Lane about the frustrations they have surrounding the new traffic light system outside Melvyn Clarke and Scotts Butchers.

TfL has implemented a new crossing trial in The Wrythe, where the traffic lights adjacent to Melvyn Clarke have been altered with 'green person authority' technology; meaning the lights are permanently set in favour of pedestrians. This scheme, first brought in at the end of June, was implemented without prior consultation with local residents and business owners about the impact this might have on their day-to-day lives. The feedback that I've received from local shop owners and those living nearby is that this trial has been an absolute nightmare for them, with the traffic lights constantly beeping even when pedestrians are not wishing to cross.

As well as the constant noise irritating residents, the new 'green person authority' trial is holding up traffic; increasing idling and pollution on an already busy road. With schools having returned in full this week too, the frustration with the traffic lights is only increasing.

The main concern of residents and shop owners along Green Wrythe Lane is the absence of a consultation process for this trial, as well as there being no mechanism to give feedback. I raised this with Sutton and Croydon's Conservative GLA Member, Neil Garratt, to pass these concerns over to the Mayor of London and highlight the distress this is causing local residents. I am delighted that Neil Garratt raised this issue at Mayoral Question Time in July to challenge Sadiq Khan directly that if he wishes to fundamentally change the way pedestrian crossings work, there must be a public discussion about it, so that at the very least people are aware these schemes are being implemented.

As you can see from the Mayoral Question Time exchange here, Sadiq Khan has assured Neil Garratt and residents that the 'green light authority' pilot will end this summer and the results from the pilot will be analysed in detail. As residents will rightly know, the scheme has not been removed yet and continues to disrupt and cause nuisance to people's lives.

I am also continuing to raise this directly with Transport for London myself and press for more details from TfL as to when the trial is due to end and how residents can give feedback in the meantime. If you have been affected by the 'green person authority' trial, I should be grateful to hear your views via email at elliot.colburn.mp@parliament.uk. If you would also like to be kept updated with any response I receive from TfL, please feel free to get in touch.

I am delighted to be supporting Back British Farming Day again as one of the few London MPs to represent areas of farmland.